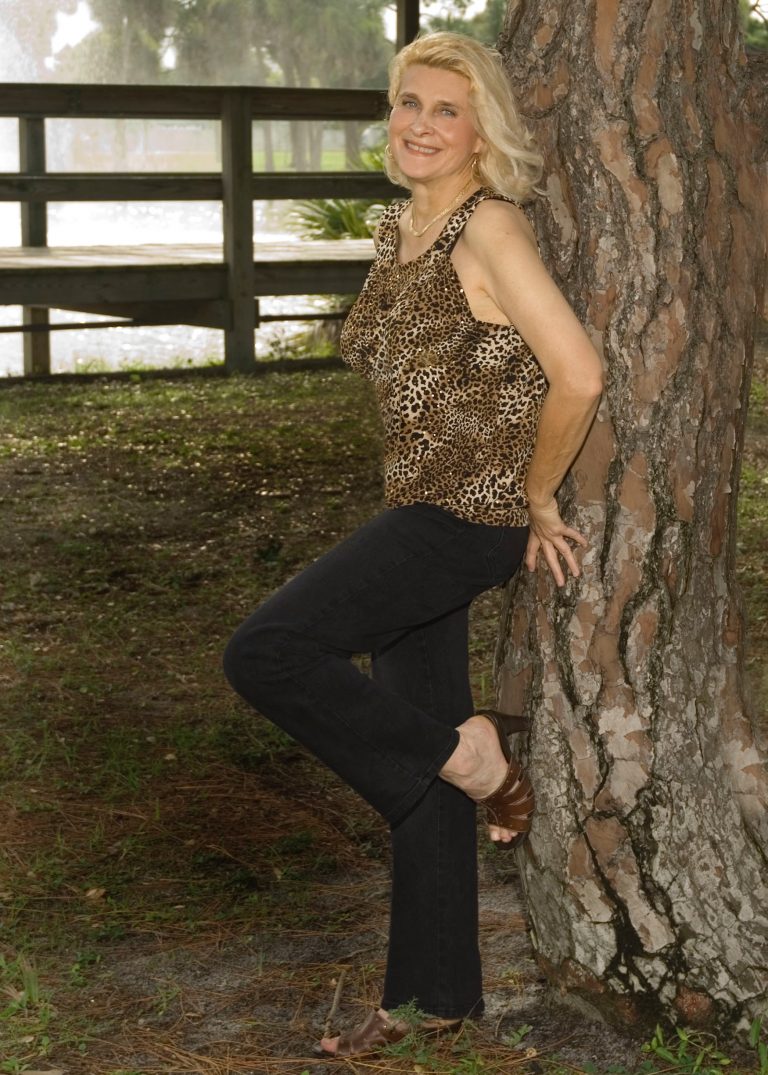 I am an inventor, an occupation I happened into over 30 years ago. Since that time, I have come to realize that an invention is merely a solution to a problem that many people share. I have leaned a lot and helped many people achieve

My definition of an inventor is a person who sees a problem that several people seem to be experiencing and creates a solution for that problem.. Necessity is truly the mother of invention.  As the result of a pregnancy I  gained weight and had bulges and fat everywhere.  I invented a series of 10 exercise machines called “The Original Toning Tables”.  Combining physical therapy and isometric exercise movements using a motorized system to facilitate active assistive exercising, The Original Toning Tables firm and tone muscles restoring elasticity and increasing energy.

Many of the 50 employees I had manufacturing The Original Toning Tables smoked  cigarettes incessantly.  To disguise their frequent, unauthorized, cigarette breaks, they pretended to be looking for tools.  I invented the “Tool Tub”, a portable tool storage container so all the tools each employee needed were in one place and there was no longer an excuse to look for missing tools.  As is the case in every invention I have made, the solutions never come all together at once.  One day 50 yellow 5 gallon pails were distributed, one for every employee complete with the tools they would need throughout the day.  Each guy grudgingly carried their pail to their work area.  Most dumped all their tools on the floor near their work station,  claiming they couldn’t find what they needed because everything was all mixed together.  I created a cordura pocketed jacket to fit over each bucket to organize and separate the tools and the open space on the bottom of the pail for a drill and any other large item.  The next complaint was that the pail was too heavy to carry around.  I built a metal cross piece and mounted swivel wheels to the bottom.  By drilling holes in the bottom of the pail to mount the wheel base onto the pail, the pail could be moved around the factory floor by pulling on the handle.  Next, they put things across the top of the bucket so they could sit down.  OK.  I fabricated a wooden seat to address this issue.  The wooden seat resulted in a few slivers!  I cut a  circle of foam we used for padding the top caps and stapled some upholstery to hold it in place.  Whew…Finally, no more complaints.   In fact, by this time, they came to love their “Tool Tub”.  Everyone was less tired after a typical workday because instead of bending over or working on their knees, and getting up and down 50 times in a day, they could sit comfortably and do their job.  Job performance increased, overall attitude and morale was up and production was increased with substantially fewer quality control issues.  They started racing around the factory and even ate lunch and took their breaks sitting on their “Tool Tub”.

It took a lot of components to keep 50 employees busy.  Deliveries of pallets of parts took approximately 30 minutes each.  During this time the truck drivers usually walked around, glad to stretch their legs before getting back behind the wheel.  One such driver noticed several of the guys zipping around on their Tool Tub and asked me where I got them.  I said I made them for my guys.  He said,  no really, was it Grainger or Home Depot?  I said no, I made them for my guys.  Exclaiming he wanted to buy one, this happened over and over again.  I decided to go to a professional trade show and see whether this was a viable product. 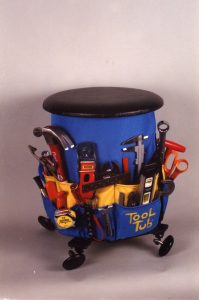 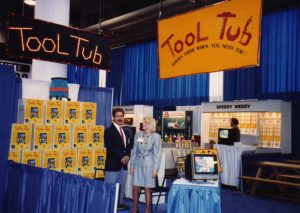 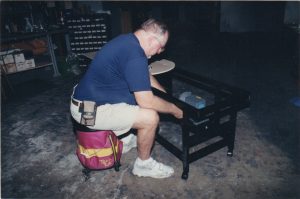 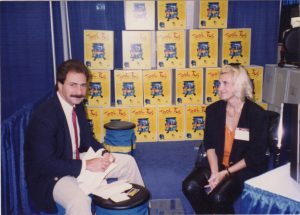 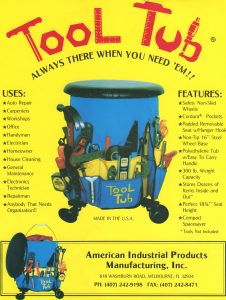 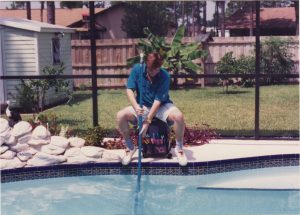 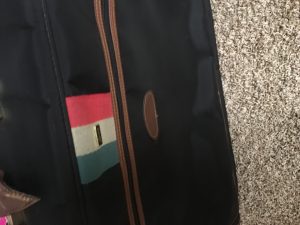 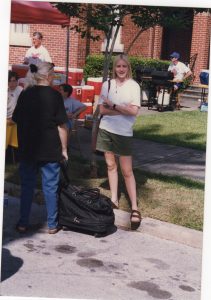 mera equipment while I traveled around the country training new salon owners who purchased The Original Toning Tables to open a business, I struggled with carrying or dragging luggage.  I put 4 completely swivel wheels on my suitcase and called it “Charlie”.  I had offers to buy “Charlie” for $50-$100 several times during my many business trips.   Using “Charlie” I could easily pull 50 lbs. of stuff with my little finger with virtually no effort or strain.  It was always frustrating to guess which lenses and other camera gear I should take with me when I travelled, not wanting to miss a shot.  Charlie made it easy to tote all my camera equipment through the airport with no effort.  Since I was literally the 1st person to have luggage on wheels, the airport staff had no idea how to deal with this situation.  When challenged about “Charlie” fitting in the overhead compartment, I simply removed the camera bag, my purse, my sweatshirt and collapsed “Charlie” nearly flat, except for the 4″ of wheels.  Of course it did fit in the overhead!   I travelled with “Charle” literally all over the world for several years before the airlines cracked down, mainly because wheels became the norm, not the exception.  Traveling was fun, before everyone was treated as a possible criminal, and airport security misuse their authority by ruining expensive Nikon lenses by sticking a finger so far into the camera that the mirror was distorted, all under the guise of making sure there was no contraband.  I am all for security, but as usual, efforts are in the wrong direction.  It is not uncommon to be stuck in a security line in excess of 45 minutes.  I was severely chastised for carrying a bottle of water I was actively drinking, and was threatened with prohibiting me from proceeding to the gate, only to learn that on that same flight, a gun had gotten through all of the security measures. 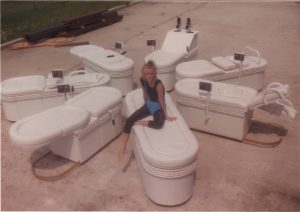 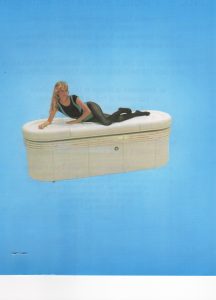 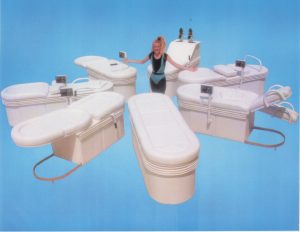 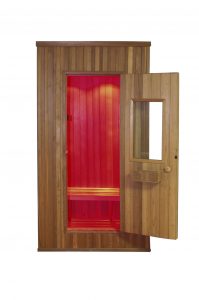 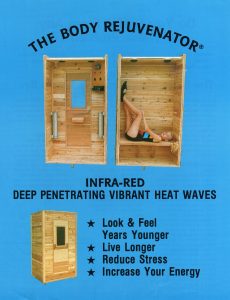 The various cuts needed resulted in tons of cedar shavings we gave to the humane society for their animal cages, and hundreds of same size cut offs.   These cutoffs were used when I invented the “A Frame Plant Stand”. 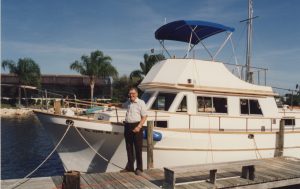 My 36’ trawler, a boat with teak wood floors developed a gummy, glue like mess in the calking in between each teak plank (each plank was approximately 2” apart), as a result of someone using the wrong cleaner on the floor. 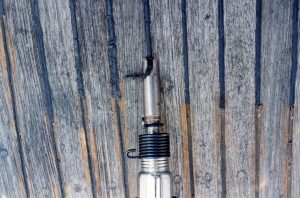 The only possible solution was to completely remove the damaged calking which ranged from semi-liquid to gummy and rubbery or hard.   No marina would attempt to repair this mess for less than $20,000 with no guarantee they could even fix it.  I invented the “Deck De-Calker”, a precision tool bit that attached to a pneumatic hammer. 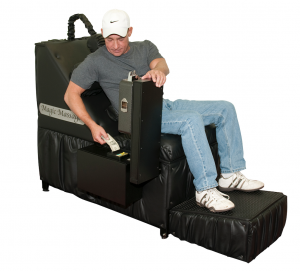 While in an airport, tired and bored, I watched as a guy gave his girlfriend a back rub.  Immediately I pictured a vending back massage chair.  I invented “The Magic Massage Chair”.  It not only gives a great back and shoulder massage, it massages the tired feet as well.  There have been 3 separate revisions of “The Magic Massage Chair.”  I could not decide which one I liked best so I manufacture all three of them!

A tow truck owner complained that existing lockout tools were hard to use and ruined the interior of the vehicle. 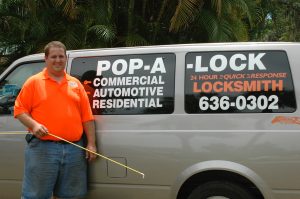 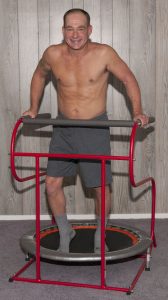 After buying a mini trampoline and nearly breaking my neck when I lost my balance and fell off, I invented “The Cardio Hop”,  a sturdy hand rail support that goes around a mini trampoline.  Now I can increase my cardio activity and brain function without risk of losing my balance and falling off.  While there have been dozens of minor ideas I have developed, these are the major inventions I have produced and manufactured throughout the last several years.

their dream of owning their own business. 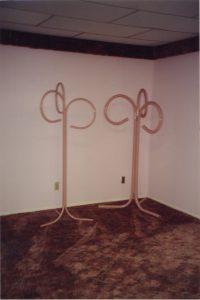 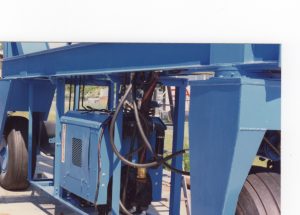 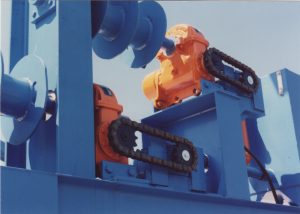 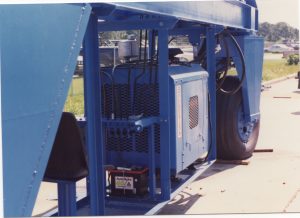 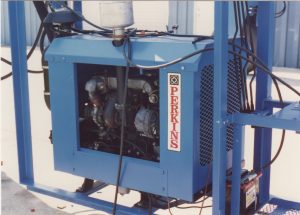 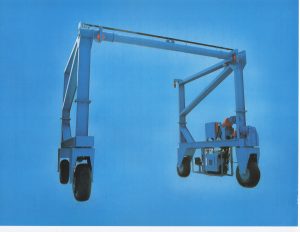 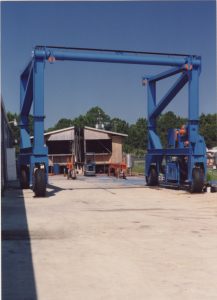