Woman Designs Own Exercise machine At Her Holly Hill Firm

Kathy Pihlaja was humiliated when she tried going to an exercise salon after a pregnancy to trim her 192 pound figure. “How could you ever do this to yourself?” seemed to be the question in everyone’s eyes when they saw her overweight body. Even more disappointing was the exercise equipment which seemed to produce more sweat and strain than noticeable results. There are probably a million women who have had the same frustrating experience, Mrs. Pihlaja thought.

The now shapely businesswoman decided to capitalize on this apparent need for a more rejuvenating form of exercise for women. “There was no pleasant way to exercise or even an attempt to provide exercise equipment made for a woman’s body. So I spent a lot of time developing something from thin air,” said Mrs. Pihlaja.

What she developed is called The Feminine Way Exercise Equipment. It consists of five motorized exercise machines that incorporate the concepts of physical therapy and isometric exercises to help tone and strengthen muscles without sweat sand strain, Mrs. Pihlaja said.

Starting about five years ago on the back porch of her home, the determined woman who holds a master’s degree in public administration worked her way through he mechanics, design, manufacture and marketing of this equipment. “I knew what I wanted but he question I kept asking was how to make this work. It was no small feat,” she said as she glanced over her 4,000 square foot warehouse in Holly Hills filled with several already constructed exercise machines. It took two years of weekends and nights after work as a counselor for Health and Rehabilitative Services here as well as plenty of patience and endless telephone conversations with several out of state machinists to transform her idea into The Feminine Way.

Her knowledge of tools and physical therapy came in handy, she recalled. “The way to most women’s hearts is with candy and flowers but to mine it’s with tools,” she laughed. Area tool suppliers didn’t take this blonde seriously when she would walk into their stores with a list of specific items she needed. but, after while, they realized that she really knew what she was talking about and began to treat her with respect, she said.

Besides her knowledge o tools, which she learned form her father, Mrs. Pihlaja had familiarized herself with therapeutic machines during a year of long confinement to a wheelchair at the age of 12. Through physical therapy and a strong mind, she managed to overcome a number of health problems including arthritis.

By late 1981, all the kinks had been worked out the equipment and The Feminine Way was ready to me marketed. Mrs. Pihlaja’s firm, Allied Associates, Inc., now is busy manufacturing a d selling the five piece exercise set to people who want to open their own figure salon. the firm provides buyers with a complete roadmap for success including training employees to use the equipment and pointer on how to design and market a salon.

Allied Associates has introduced five separate exercise machines. Each machine is designed to firm, tone, stretch, and strengthen different muscles. The equipment utilizes a combination of physical therapy and isometric exercises. Features include self paced orientation for wider range in application. In addition, the equipment has been successfully used by individuals with a variety of physical limitations such as: heart patients, stroke victims, and individuals suffering from high blood pressure or poor blood circulation. Progressive resistance is used by different positioning on each machine and the intensity of muscle contraction. Features include M.I.G. welded steel frames in gloss black finish for appearance and durability; 4″ orthopedic foam padding for comfort and greater resilience; efficient motors’ and quality Boston gearboxes.

She Makes It Fun To Be A Loser

Katheryn Pihlaja, a 1971 SCSU social science graduate, doesn’t subscribe to the “no pain, no gain” theory of physical fitness.

In 1977 Pihlaja designed “The Feminine Way,” a series of five motorized exercise machines designed to create a slim, trim figure for women — without sweat of strain. Combining elements of physical therapy and isometrics the machines provide clients with enough repetitions in two weekly 50-minute sessions to equal 14 hours of traditional exercise. Women wear comfortable street clothes, and are surrounded by curtains as they work out. “I once weighed 192 pounds, and my trips to exercise salons were humiliating, ” Pihlaja, now a trim 120, recalls. “Everyone was forced to wear leotards and we were scrutinized by a salon staff with no understanding of what it’s like to be heavy.”

In addition to providing weight loss, The Feminine Way also can contribute to mobility. Pihlaja, who herself uses the machines as a substitute for medication to treat severe arthritis, says The Feminine Way is being used in clinical settings as an ai to physical therapy.

To manufacture the exercise tables, Pihlaja in 1978 founded Allied Associates, Inc., in the Daytona Beach Suburb of Holly Hills, Fl. Twenty Feminine Way salons have now been established across the country, including one at Front Wall Racquetball in St. Cloud, and negotiations are underway with firms in several foreign countries. A similar exercise system for men, The Exec-U-Toner, is in productions. Her primary motivation is not entrepreneurship, she explains. “I’m not that much of a businessperson. I just want to make people’s lives better.”

Cutting fat The Feminine Way is no sweat 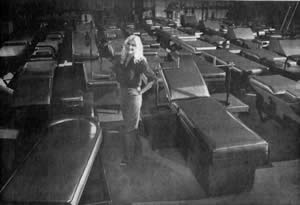 “It started out to be an easy approach to exercise. You work right along with he machine so you don’t resist it. You don’t build muscles. It tones, firms, and actually builds elasticity into the skin.” — Kathy Pihlaja, Inventor of “The Feminine Way”

Some women want to be strong and muscular. some want to be trim and toned without the muscles. Some women like to work hard and sweat while losing weight and staying fit. Others simply want to lose their extra pounds.

Kathy Pihlaja, Daytona Beach, FL, did not want to become a body builder to trim down from the 192 pounds she weighed after having her second child. And she did not like feeling embarrassed by her weight when she went into a health or diet center.

To solve her problems. the St. Cloud native invented five machines that help women lose inches and pounds, quickly and privately. Called The Feminine Way, the exercise equipment costs $27,500. Obviously not intended for home use, the fitness salon Pihlaja designed provides women with private places to exercise. “It started out to be an easy approach to exercise,” Pihlaja said. “You work right along with the machine so you don’t resist it. You don’t build a muscle. It tones, firms and actually builds elasticity into the skin.”

Basically each machine is a metal table covered with an upholstered pad. motors in each base move the equipment, raising the legs or arms over a thousand times in a 10-minute session. The customer lies on the table, wearing her street clothes if she wants, and the machine moves her in the appropriate places. She does a little work, usually holding in her stomach and buttocks. Because she does not have to use her own muscles, the client can tolerate more repetitions of the exercises than she could when doing calisthenics, for example, where she resists gravity with her own power, according to Pihlaja.

In 1977 the St. Cloud Tech and St. Cloud State College graduate began building her idea. She started with a knack for inventing she picked up from her father and a knowledge of body movement gained from years of physical therapy to treat her juvenile arthritis. “I grew up with my parents always inventing and designing things,” Pihlaja said. Her father, Alex Weber, is manager of quality control at Franklin Manufacturing. As owner and operator Pihlaja opened her first salon in 1978 with five prototype machines. At that time, she designed the salon concept that she has sold to 19 other women around the country.

“You would walk in the door and see a wall of curtains, each machine is surrounded by curtains,” she said. Offended by what she called insensitivity, pihlaja wanted to five women the chance to lose weight without being ashamed of having gained it. “I never hire anybody who is a toothpick,” she said. “You should hire employees who have a weight problem because customers see the employees coming down, too.” The curtains can be left open at the customer’s request.

In the privacy of the rooms, attendants measure each client in eight different spots: ankle, calf, lower and upper thigh, abdomen, waist, upper back, and upper arm. Then the client undergoes on 10-minute treatment on each machine. “The person is more of less hand-carried through the steps to make sure they do what they’re supposed to be doing,” Pihlaja explained. When she first beings a program, a customer should visit the salon twice a week. “Two hours (on the machines) equals 14 hours of exercise, floor exercise, Nautilus or a workout,” Pihlaja said. but once she has reached her goal, the client should return once a week to maintain that trim figure, the inventor recommends.

“It’s like dyeing your hair. if you quit, your roots show through,” she said. “I definitely go on once a week.” Pihlaja said. “It comes to one and a half because of all the testing we do.” Pihlaja did not franchise her salons. Rather she sells the equipment and with it the design and plans for the salon. “I strongly recommend that they charge $5 per visit. The longer I’ve been at this, the more I push that,” she said. She has sold all of her shops since 1980, most of them in the eastern United States.

This summer Pihlaja began expanding in two new directions. All summer she and her staff of specialists have been working on five machines for men. “Since men seem to have the majority of their problems in the mid-section, (the machines) get rid of love handles, flattens the tummy, and works out the arms and chest,” Pihlaja said. She hopes to open uni-sex salons featuring the Feminine Way and the new Exec-U-Toner. Pihlaja’s company Allied Associates, has been approached by companies in Germany, Saudi Arabia and Ecuador. She expects to have sold the machines to new shop owners in those countries within the next year. “We’re not a fly-by-night outfit. Not a little jump rope or a spring on the door,” she said. “People should have a choice. What we’re offering is an alternative. There are people out there who don’t want to work to lose weight.”